What do Boxelder Bugs Eat? The Diet of Vivid & Pesky Pests!

Boxelder bugs are fall and spring pests, typically emerging from their indoor hiding spots as the temperatures rise in April and May.

Cold-weather pests like mice can wreak havoc as they chew through food and spread waste around your home. Other annoyances like moths or silverfish can create holes in your clothing or furniture for their food.

But what do boxelder bugs eat when they sneak inside your home?

If you’re worried about these fall invaders, we can help! Check out our article on a boxelder bug’s diet, and contact proof. pest control whenever you need a quality pest control service.

These pests typically crop up outdoors during the spring and summer months. Boxelder bugs prefer warmer temperatures over the frigid winter chill.

From April to late September, many residents in proof.’s service areas can spot these black and orange insects lounging on boxelder trees. While the insects can’t seriously harm the trees, they may still cause superficial damage.

Boxelder bugs become pests during the chilly fall months. Many insects can’t survive in temperatures lower than 40 or 50 degrees and rush to warmer areas to hibernate and stay alive.

At certain times of the year, you might see them tightly grouped on warm rocks or the side of buildings. Boxelder bugs commonly search for entry points into structures where they can hide away from the cold.

Generally, boxelder bugs hibernate inside your home in attics and wall voids, according to the University of Washington-Madison’s Horticulture Extension. Under normal winter conditions, the bugs stay hidden away indoors until the weather outside heats up.

However, interior heating or warm winters can rouse these pests prematurely. Boxelder bugs are regular indoor sights during spring and summer, but you may also spot them as the snow falls outdoors!

What do Boxelder Bugs Eat Inside my Home?

When they’re stuck inside, what do boxelder bugs eat? Boxelder bugs won’t consume anything in your home like other overwintering pests. Because boxelder bugs hibernate during the winter, they consume everything that can sustain them before looking for areas to rest.

According to Michigan State University, boxelder bugs search for these temperature-controlled areas to stay until the weather grows warm, relying on their energy stores to sustain them until they’re ready to move again.

While you won’t have to worry about boxelder bugs eating anything indoors, you’ll be in for quite the surprise after they complete their extended break. Known for their bright orange hue, boxelder bugs spread their vivid color around your home.

Once they awaken and search for food, the bugs can leave feces everywhere indoors. Often yellow, brown, or orange, these fecal stains are unsightly additions to your carpeting, furniture, and curtains. Plus, it’s difficult to clean up, too!

Boxelder bugs won’t reproduce while they’re inside, but the adult population will still bombard the common areas in your home as they try to reach the outdoors.

While tempting, avoid squashing these pests as they roam about inside. They can leave behind a bright orange stain and coat your flooring or other carpeted items with vivid colors when crushed.

What do Boxelder Bugs Eat Outdoors? 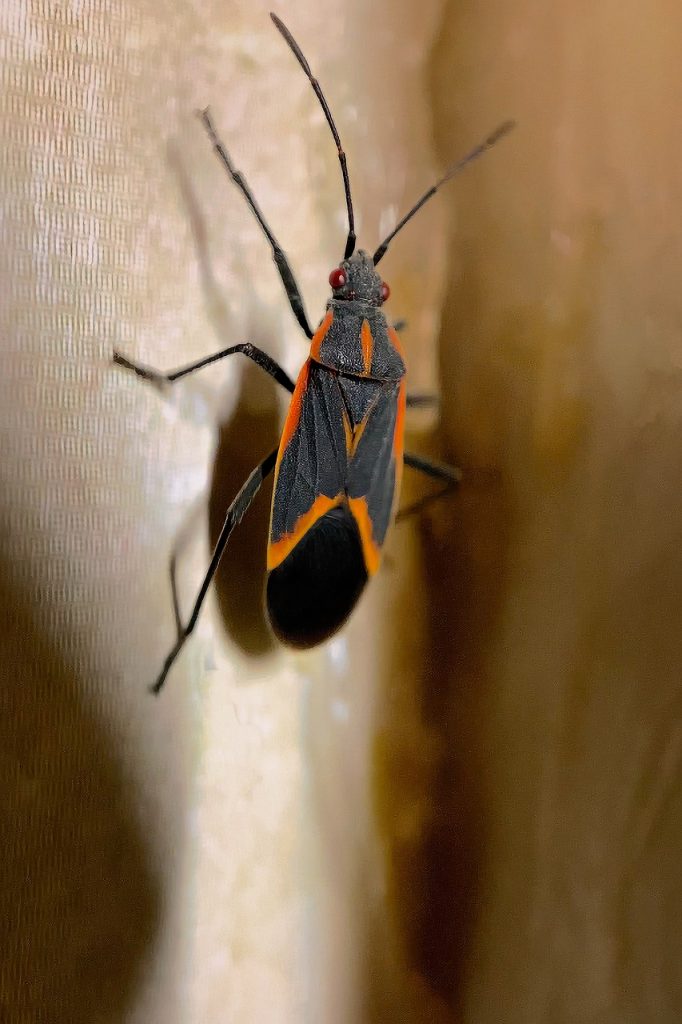 The great outdoors is the boxelder bug’s primary habitat. As the weather warms up, these pests clamber to windows and doors to escape outside to reach food. So, what do boxelder bugs eat when they get outside?

Boxelder bugs regularly rely on boxelder trees to meet their nutritional needs. Instead of feasting on the tree’s rough bark, the insects prefer to dine on seeds, leaves, and tree sap.

Occasionally, boxelder bugs can migrate to other tree species like maple or ash. Fruit trees and bushes are other hotspots for boxelder bugs, too.

Their feeding habits aren’t as destructive as other backyard or garden pests, but they can still cause slight damage to your trees and fruits. Because boxelder bugs target developing sprouts and leaves, they can discolor or decrease the number of leaves.

Unless you have a significant infestation outdoors, it’s unlikely the boxelder bugs will eat enough foliage to cause deterioration.

How to Remove Boxelder Bugs

When you need to eliminate boxelder bugs, remember to never squash or crush them as a form of pest control. While it will remove any pests you see, it won’t impact the larger population and may stain your carpet or furniture orange!

Prevention is one of the most effective ways to keep these pests at bay. Before worrying about pest control methods, consider repairing cracks or crevices that allow boxelder bugs to sneak indoors.

Many insect infestations stem from small open gaps on the exterior of your home or ill-fitting doors and windows. Pests can sneak inside through any tiny crack, so use caulk or plaster on your home’s foundation cracks and install weather stripping on doors and windows.

Boxelder bugs may not eat anything in your home, but they’re not a welcome houseguest you’ll want to stay for the winter. Once these pests have invaded, there are a few tricks you can try to eliminate them.

Try some of these options whenever you notice boxelder bugs swarming the interior of your home:

Diatomaceous earth is an option for many insect infestations as the diatom-based powder slowly destroys an insect’s exoskeleton. However, it won’t affect all the bugs unless they eat or interact with the powder.

Interior pesticides can work but won’t impact any hibernating bugs away from the treatment areas. Plus, some storebought options may not remove the insects inside, especially if you have trouble reaching their ranks.

Dish soap and water can similarly work to break down their exoskeletons and nervous systems but won’t work as effectively as other heavy-duty options.

When all else fails, use your vacuum cleaner to remove these pests!

Are you looking for a hands-off and mess-free solution? Consider contacting proof. pest control for our boxelder bug pest management services! Whenever you struggle with annoying pests, give us a call or contact us here today!

What do Boxelder Bugs Eat? The Diet of Vivid & Pesky Pests!

Sep 13
Boxelder bugs are fall and spring pests, typically emerging from their indoor hiding spots as the temperatures rise in A ...
VIEW ARTICLE