What do Wasps Eat? Keeping Your Home Safe From Pests

August 1, 2022
By Allison Clayton
← prev post next post →
Ever wonder why your backyard is filled with wasps? These pests often populate your property, making outdoor activities difficult. You can’t relax with a handful of wasps buzzing around overhead!

So, what do wasps eat in your yard that keeps them coming back? Take a look at our article to learn everything you need to know about a wasp’s diet and the steps you can take to lessen their presence around your home.

From early spring to fall, wasps build their nests and forage throughout many homeowners’ backyards. From building underground colonies to vast hives in garages and porches, wasps can cause significant problems for many of proof.’s customers.

Here are some wasps you may find flitting around your backyard looking for a bite to eat!

Despite all being wasps, not every species is the same. Each has distinct behaviors, characteristics, and hives that set them apart.

Instead of finding them building aboveground, most yellowjackets create deep underground hives to house their queen, eggs, and food. Hidden away in the intricate honeycomb-like structures, yellowjacket queens will lay eggs until winter.

Typically crafting nests in branches, under porches, or along the side of houses, paper wasps are common outdoor pests many homeowners find on their property. As their name suggests, paper wasps craft their nest from a paper-like pulpy substance.

While other wasp species are social insects, mud daubers prefer to stick to themselves. Instead of intricate hives, mud daubers craft small tubes to house themselves and their young.

Rather than forming their hives from wood pulp, mud daubers will construct dirt tubes from nearby caches of mud or soil. Unlike other aggressive wasp species, mud daubers are typically docile unless provoked and prey on common pests to feed their maturing larvae.

Mud daubers won’t congregate in large numbers and only create small nests to care for their hatching larvae. Unless they invade your home, mud daubers are effective pest control solutions to help keep spiders away!

European hornets are the only actual hornets that populate areas across the United States. While the bald-faced hornet’s name and unique appearance may cause confusion, the European hornet is the only hornet species you’ll find in your backyard.

Hornets are larger than typical yellowjackets, and their sting can pack quite the punch. With their stings often reported as more painful than bees, European hornets are dangerous additions to anyone’s property.

Reports of dangerous “murder hornets” have cropped up, but these harmful insects have not established a foothold in the United States. Most sightings of Asian giant hornets are isolated to the west coast, so many of proof.’s customers shouldn’t have to worry about these pests sneaking into their yards!

With over 18,000 wasp species in the United States, there is something that keeps these pests returning to our residences. Many backyard spaces are hotspots for wasps because of a large abundance of food options.

What do wasps eat that keep them hanging around our yards? Take a look at our curated list to understand what wasps eat on your property!

Many wasps are predators of small insects like caterpillars, aphids, and bees. When wasps establish hives near a bee colony, these pests often readily destroy the bee population.

Despite their predatory behavior toward other bugs, many adult wasps won’t consume the prey they eat. Most wasp species forgo protein-heavy meals after changing into their adult forms. Instead, they reserve these food sources for the maturing young. However, don’t be surprised if you see a wasp chow down on meat from your backyard barbeque!

Mud daubers often capture spiders for their larvae and deposit them inside their tiny mud hives. According to the University of California’s Division of Agriculture and Natural Resources, a mud dauber will place around 30 spiders within individual cells, accumulating up to 500 spiders eaten by their young!

What Do Wasps Eat In Place of Meat?

Wasps regularly flock toward sweet fruits, berries, and nectar when foraging for food. For homeowners with fig and berry bushes or fruit trees, you may encounter a wasp trying to reach for a sweet treat! Take a look at a European hornet eating through an apple in this video.

Instead of feasting on their captured prey, adult wasps pass small insects or bees to their developing larvae. After preparing the captured meals for their young, some wasp species will dine on sweet secretions produced by the growing wasps. Wasps may occasionally eat other insects or human-made meat dishes, but they typically forage for nectar and pollen for themselves.

Because nectar and fruit are a substantial portion of a wasp’s diet, similar substances can attract them to your yard. What do wasps eat while you’re enjoying a day outdoors? They’ll consume almost any sweet food items you have out!

If you have cut fruit or opened cans of soda, juice, or alcohol, wasps could fight for a seat at your backyard picnic. As the season cools down and their available flower food sources dwindle, you may find scores of angry pests searching for a meal around your backyard. 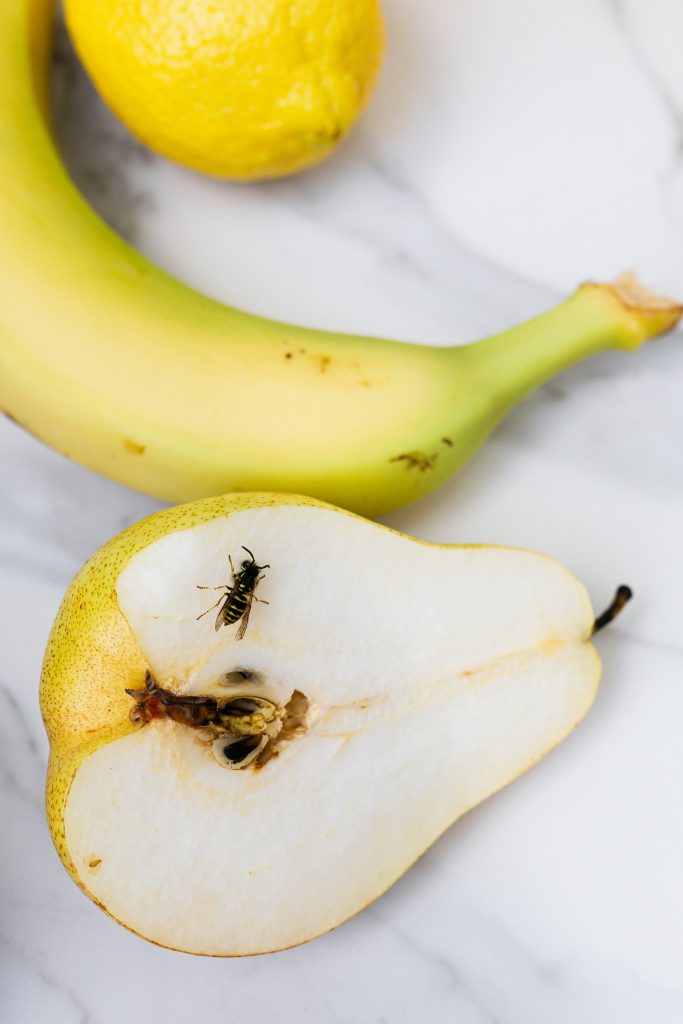 If wasps are eating you out of house and home, proof. pest control can lend a hand! Don’t suffer through a tough wasp infestation alone!

No one wants to deal with pesky wasps ruining their outdoor plans and interrupting barbeques, parties, or picnics. You shouldn’t worry about sharing your soda with a nosy yellowjacket or hornet!

proof.’s wasp pest control services can stop them in their tracks. Our technicians are trained to remove any dangerous pests from your property, and we can keep your family safe from these stinging insects.

Contact us today to learn more about services or schedule a pest control treatment for your home!

What do Wasps Eat? Keeping Your Home Safe From Pests

Aug 1
Ever wonder why your backyard is filled with wasps? These pests often populate your property, making outdoor activities ...
VIEW ARTICLE

Jul 26
Despite the sweltering heat, summer is a time to enjoy the outdoors! As the sun climbs high in the sky, many homeowners ...
VIEW ARTICLE

5 Dangerous Types of Wasp Nests to Watch Out for This Summer!

Jul 14
As summer gets increasingly hotter, more bugs are coming out to enjoy the sun! Unfortunately, you’ll have to battle fo ...
VIEW ARTICLE